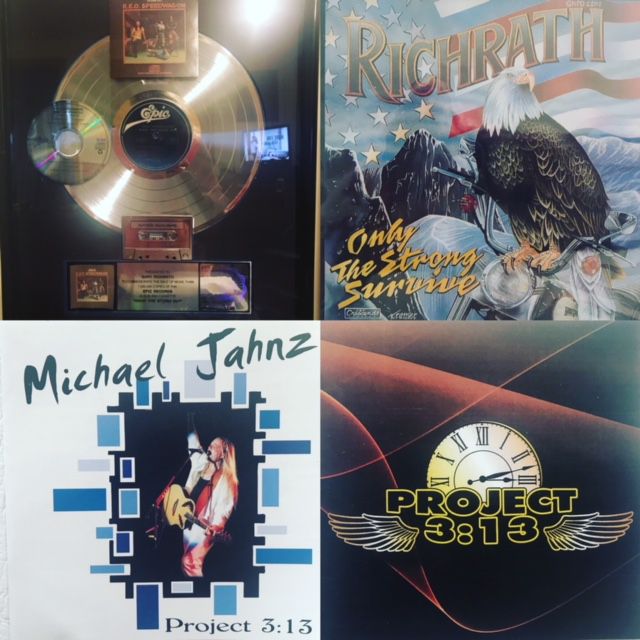 History In The Making...

As you know, we have been alluding to a big announcement for some time now. All the "COMING SOON" and "STAY TUNED" teasers have finally come to fruition. You are all aware of Michael's connection with the music of REO Speedwagon and of course, more importantly, his history with the legendary Gary Richrath. Michael and his band Project 3:13 have continued to honor the memory of Gary at every show.

Playing the classic REO hits that Gary had written, along with the Richrath hits that Gary and Michael had written together, each show brings out a few new memories and stories that Michael and Gary had shared, as they toured together for over a decade. Not only were Michael and Gary musical partners but for many, many years, best friends. Michael was the best man at Gary's wedding in the 1990's. They shared so much together. Gary was truly Michael's mentor. They found themselves many a late night in the recording studio and more often than not they found themselves noticing the clock at the same time, you got it, 3:13.

These phenomena became quite prevalent in their lives. The "3:13" has been a Gary and Michael thing from the beginning. Michael's own brother who passed away also had his birthday on 3/13. So, it only seemed apropos that when Michael decided to choose a new name for his new "Project" back in the early 2000's, he decided to aptly name it "Project 3:13". There have been many incarnations of Project 3:13 throughout the next decade and Michael has been happy to share the stage with so many musicians.

Recording and releasing the Richrath "Only the Strong Survive" CD on the Crescendo Records label and then touring nationally was the highlight of Gary and Michael's time together. Michael has been working diligently for years to be able to create that scenario again. So many Richrath fans have been waiting and wanting "New" Richrath music but since the unfortunate passing of Gary they have almost lost hope.

The perfect storm has finally happened... Michael has gathered himself a phenomenal group of talented musicians, dusted off a few never heard before Gary and Michael recordings and has been granted a new record deal with Dark Star Records! The studio is fired up and ready to rock. Not only will you be hearing new Richrath music but, Gary's magical guitar work will be on a few of the new hits, played by Gary Richrath himself! There will also be some phenomenal originals written by Michael that we can't wait for you to hear. Still, to this day, the Richrath "Only the Strong Survive" CD, in which Michael is credited for writing half the songs, is being sold worldwide and we can not wait to introduce the new CD to everyone!

We're very excited and planning a media frenzy around the release of the new CD! So fans, on the cusp of this news, you can plan on new Richrath music this summer! There will be a new CD and a whole new look and feel to the band! We are honored and excited to announce... Richrath Project 3:13

In 1988, the magnificently rich vocals of Michael Jahnz caught the attention of Gary Richrath, former lead guitarist and songwriter for REO Speedwagon. At the time, Jahnz was playing with his band Vancouver in the prestigious Hollywood circuit at places like the Roxy, Whiskey-A-Go-Go and the Troubadour, and had previously enjoyed success touring with Badfinger.

Contemplating a solo career after $30 million in record sales with monster hits like "Ridin' the Storm Out" and "Take It On the Run", REO's Richrath formally asked Jahnz to join his new band, Richrath. The resulting combination of Jahnz on vocals and Richrath's legendary guitar and song writing abilities formed a dynamic team. After drawing crowds of thousands throughout North America, the band finally relented to the demands of fans for a new CD, and headed into the recording studio amidst a grueling tour schedule. Only the Strong Survive was released on GNP Cresendo Records in 1992, featuring outstanding original recordings by Jahnz and Richrath. Says Gary Richrath, "Michael Jahnz is a tremendous singer and songwriter. His songs are just dynamite!" So good, in fact, that Richrath shared song writing responsibilities, and credits him with nearly half of the songs that appear on the CD.

Jahnz and Richrath then headed back into the recording studio with a collection of dozens of songs they had been writing on the road and in the interim. After scores of late nights in the recording studio (many until 3:13 am), Richrath and Jahnz amicably parted company, with Jahnz forging ahead with his new material aptly titled Project 3:13.

Dennis started playing guitar at the young age of 8. He has been aroun00d the Milwaukee music scene for many years, including playing in the band Badd Habit and our very own Project 3:13! The first concert Dennis attended was the awesome Johnny Cash at the Wisconsin State Fair. He first saw REO Speedwagon in Oshkosh, Wisconsin where he immediately fell for Gary Richrath’s guitar playing. His number one influence from that point forward of course, Gary Richrath and Dennis also lists guitar greats Eric Clapton, Stevie Ray Vaughan and Randy Rhoads as influences. Dennis’s gear includes Gibson Les Pauls and Marshall amplification. Dennis exclaims, “I keep a fire extinguisher next to my amp in case my fretboard starts on fire!”. Happy to be rejoining the band, he can’t wait to again play all the riffs of his favorite guitar player, Gary Richrath!

At the young age of 6, Scott found an interest in the piano. In high school he studied classical music and theory and it is at this age he first got involved in playing in a band. His first band to hit the stage was ABWB (Average Black and White Band). After leaving high school, the road to music really opened up and playing in several local bands opened the doors to several different styles of music. His influences have been Elton John, ELP, Pink Floyd, Deep Purple, and Asia as well as many others. But his favorite was the first band he ever saw live, REO Speedwagon!

From the playing style of Gary Richrath and that beautiful Les Paul, to the sounds of a minimoog and a B3 organ that was and still is Neil Daughty, that's all it took! Who ever thought he would answer an ad in the paper years later for a chance to play with Gary Richrath when Gary was doing his solo career! He got the job as Richrath's keyboardist in 1996! This has now turned out to be the current band Project 3:13. Scott and Michael have been keeping the spirit of Gary's and REO's sound in their hearts and in the hearts of all those who also love their music. "I enjoy my playing of this great music and always have. I will continue, along with Michael, to deliver this to the many fans of these great musicians that have made up REO."

Antonio started taking guitar lessons at the age of 13.  His guitar teacher was teaching him Mary Had a Little Lamb when he wanted to be playing AC/DC’s Back in Black and Shout it Out Loud by KISS.  When Antonio signed up for the high school band he was asked to play bass they already had two guitarists.  Antonio’s mom bought him a Hagestrom F400 HIIB bass and Peavey TKO 80.  He joined his first rock band about his 4th day in high school.  Over the next four years Antonio joined every band in school he could, learning a wide range of musical styles.  At the age of 16 Antonio was playing with a metal band, Heavensfate, performing in rock clubs from Wisconsin to Michigan.  With headlining performances at clubs like the Thirsty Whale in Chicago and the Jabberwocky in Milwaukee (West Allis).  The band recorded a demo at Opus Studios in Gurnee, IL which received air play on 103.1 WVVX.

Over the years Antonio continued honing his bass skills by holding down the low end for such acts as The Rex Carroll Band, Milwaukee’s Bad Medicine, Fierce Heart and various other bands as a fill in player.

Notable performances include multiple performances at Milwaukee’s Summer Fest with The Rex Carroll Band and Bad Medicine, the Harley 100th Anniversary, and a performance in front of 16,000 bikers at the Tomahawk Bike Rally.  Antonio has opened for Head East, Trick Pony, Holland, Night Ranger, Trixter, Kansas, and various other national acts.

Andy comes from a musical family and has been playing drums since age 6. He has been performing throughout Wisconsin and neighboring states for over 30 years and has been a fixture in the Milwaukee music scene since 1979. Displaying widely varied styles, Andy has performed music ranging from country to metal and everything in between. A very versatile musician, he is equally skilled on congas and bongos as he is on a drum set.  He traveled extensively with the R&B group The John Frye Band during the 1980's and was a founding member of the well known Milwaukee based band Roadkill with whom he appeared during most of the 1990's. Andy has a passion for live performing and brings great energy and intensity to his performances. Musical influences include The Who, The Police and of course REO Speedwagon, which was his first concert ever back in about 1975.